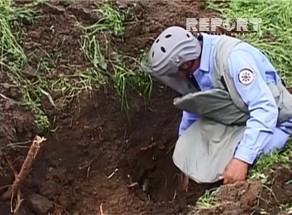 At present, specially instructed mobile riot operation groups are carrying out clearing of unexploded ordnances (UXO) in the territories of Fuzuli, Aghdam, Goranboy and Tartar regions.

It was told by the official of the Azerbaijan National Agency for Mine Action (ANAMA).

He said that clearing are being conducted in the territories of 29 frontline villages: 'Today we are conducting clearing of unexploded ordnances (UXO) of Garaghaji, Gapanli and other villages of Tartar region. During searches, 10 UXOs have been taken and neutralized at the central destruction area'.

ANAMA official said that operational search actions are being carried out: 'Mainly territory of Gapanli village of Tartar region contaminated as a result of ammunitions shot by Armenian side.'