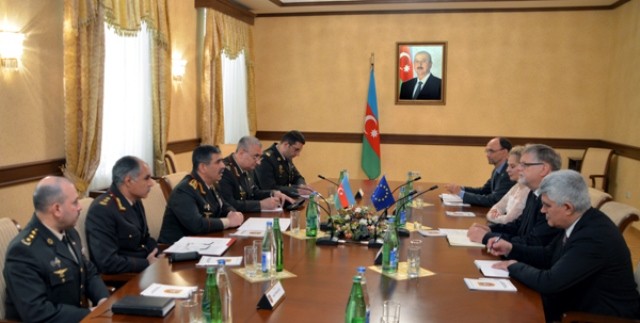 During the meeting the recent incidents and escalation of military operations along the Armenian-Azerbaijan line of contact as well as current status have been discussed, and Colonel- general Hasanov has drawn the delegation's attention to the facts of how our settlements and civilians have been exposed to shelling and firings.

The Defense Minister stressed that Azerbaijan's internationally recognized territories have been remaining under Armenian occupation more than twenty years and as a result of that more than one million Azerbaijanis still remain internally displaced people and negotiation process continues to be inconclusive.

“Armenia tries to gather mercenaries and members of terror organisations, from various hotspots of the world, as volunteers to the occupied territories of Azerbaijan. Yerevan has already been neglecting every point with its actions and raised this fact to the state level clearly cooperating with terror organisations. We require from international organisations to legitimately and fairly assess this issue,” minister said.

The deputy Prosecutor General of the Republic of Azerbaijan - Military Prosecutor of the Republic of Azerbaijan, Lieutenant general Khanlar Valiyev took part in the meeting and he stressed that the current officials holding high ranking positions in Armenian leadership committed very serious crimes during the occupation of Azerbaijan territories. He also brought the guests' attention to the facts and evidences regarding the attrocities commited by Armenian military personnel against Azerbaijani civilians during the recent incident and impiety towards the corpses that remained in the battlefield.

At the end of the meeting questions interested the guests have been answered.