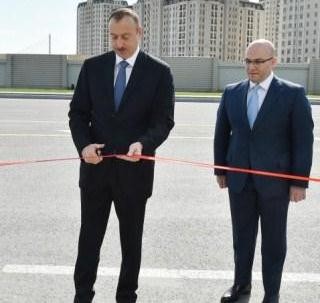 President of the Republic of Azerbaijan Ilham Aliyev has attended the opening of the second bus depot of Bakubus LLC.

The head of state was informed of the conditions created at the facility.

Located near Koroglu metro station, the depot provides a parking lot for up to 300 buses.

President Ilham Aliyev cut the ribbon symbolizing the official opening of the depot, and viewed the administrative building here.

Director General of Baku Transport Agency under the Cabinet of Ministers Vusal Karimli informed the head of state of the 10-month activity of Bakubus LLC.

The head of state was informed that the second depot of the company occupies a total area of eight hectares.

There are administrative and secondary buildings, facilities for drivers, medical points, repair and washing centers, as well as buildings for the night shift employees.

President Ilham Aliyev wished the staff of the company success.