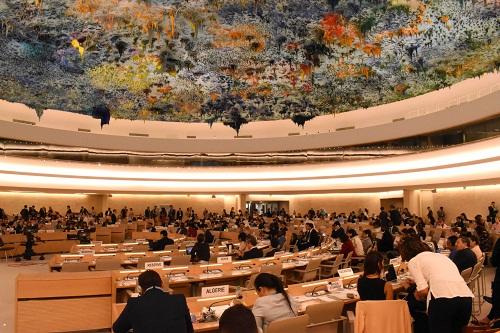 Within the 39th session of the UN Human Rights Council (UNHRC), a meeting on adoption of the report of the Working Group on the Universal Periodic Review (UPR) on the 3rd periodic report of the Republic of Azerbaijan was held.

Axar.az reports citing that the press service of the Ministry of Foreign Affairs, Azerbaijani Deputy foreign Minister Khalaf Khalafov made an opening speech at the event and said that most of 259 recommendations submitted to Baku within the consideration on Universal Periodic Review are supported, a part of them has been fulfilled and remaining part is being fulfilled.

The deputy minister stressed that Azerbaijan places a special emphasis on UN contract authorities and cooperation within the UPR mechanism. He informed about the Azerbaijani President’s order on creation of a working group to operate as a national mechanism for tighteningthe control over the fulfillment of the recommendations on Azerbaijan within the mentioned mechanisms.

Pointing increase of Azerbaijan’s economic indicators as an indicator of sustainable and regular development, Khalafov also informed about the measures taken by government in economic and social fields, including sustainable development, health, education, woman, children and protection of disabled people’s rights.

At the same time, he touched upon the works done for the improvement of economic and social condition of the refugees and IDPs and informed the Council about the works carried out on the restoration of the Jojug Marjanli village of Jabrayil district liberated from Armenian occupation in April 2016.

In this regard, the deputy minister noted that the basic rights of refugees and IDPs have been violated during 30 years as a result of the occupation of Azerbaijan’s lands by Armenia and urged the UN High Commissioner for Human Rights to take serious steps for restoration of violated rights of the Azerbaijani refugees and IDPs in accordance with the resolutions of the UN Security Council and UN General Assembly.

At the meeting, representatives of many countries made speeches and congratulated the Azerbaijani delegation for constructive participation and recommended adoption of Azerbaijan’s report on UPR by UNHRC.

At the end of the meeting, the HRC unanimously adopted the report of the Working Group on the Universal Periodic Review (UPR) on Azerbaijan.