"Azerbaijani Army's victory is a victory of the country" 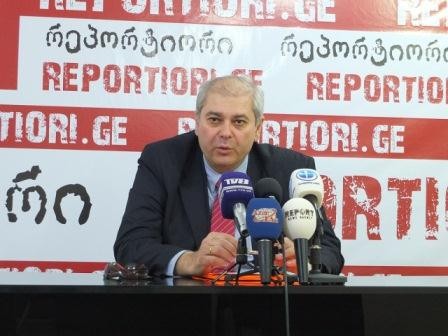 Achievements on the frontline are not only Azerbaijan Army's victory, but also a victory of its diplomacy. Because at present, power is not a key factor.

It was told by Director of Georgia's Center for Terrorism and Political Studies, political scientist Badri Natchkebiya.

According to the political scientist, conflicts in the South Caucasus region inherited from the former Soviet Union.

B.Natchkebiya noted with regret that the regional problems established in the ethnic conflicts: One hotbed of war established in Azerbaijan, two in Georgia. I should note that as a result of wisdom, diplomacy and far-sighted policy pursued by Heydar Aliyev, one of the most prominent political leaders, problems of other ethnic minorities have not occurred in Azerbaijan. Due to successful continuation of this policy by President Ilham Aliyev, Azerbaijan doesn't face with the second ethnic problem. It is, of course, a result of wise policy, great diplomacy of Azerbaijani leadership. Azerbaijan is pursuing a multi-vector foreign policy, develops, strengthen its stands in the international arena'.

The political scientist said that unlike Azerbaijan, serious ethnic problems took place in Georgia. According to him, it was related with weakness of Georgian government's foreign policy and diplomacy during that period: 'I think that Georgia should learn a lot from Azerbaijan, especially in the issues regarding foreign policy, international relations. Georgia's foreign policy today is facing great risk. Therefore, I think that it is important to study the experience of Azerbaijan in this field'.

Touching upon the resolution of conflicts in the region, the political scientist said that it is important to be careful in this matter. Power is not the only factor: 'Frontline events once again showed that President Ilham Aliyev pursues very correct and wise policy. In my opinion, victory on the battle region is not only military victory, but firstly, a victory of Azerbaijan's diplomacy. I think that after fair resolution to the Nagorno-Karabakh conflict, restoration of territorial integrity of Azerbaijan, other conflicts in the South Caucasus, war in Georgia will be solved. This day is not far', B.Natchkebia stressed.