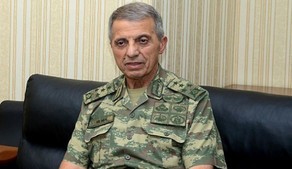 Chief of the General Command of Turkish Gendarmerie has arrived in Baku.

In the Heydar Aliyev International Airport the guest was met high-ranking Azerbaijani persons as well as employees of the Turkish Embassy in Azerbaijan.

During the visit, G.Mendi will hold meetings with the heads of the military structures of Azerbaijan and discuss prospects of military cooperation between the two countries.