Azerbaijan's military bands to organize performances on May 9 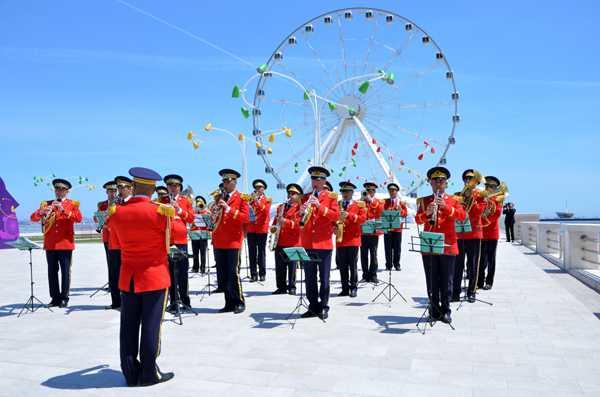 On the occasion of the celebration of the 74th anniversary of the Victory over fascism, the military bands of Azerbaijan will organize performances in various parts of Baku from 5:00 pm to 7:00 pm on May 9.

Axar.az reports citing the Defense Ministry of the country.

Military bands will perform at the following six places:

- Baku Seaside Boulevard (in front of the Azadlig Square);

- Heydar Aliyev Park next to the Ukrainian circle in the Ahmadli settlement;

On the occasion of the celebration of the 74th anniversary of the Victory over fascism, the soldier’s field kitchen will be deployed for guests at 12:00 on May 9 in the courtyard of the Organization of Veterans of War, Labor and Armed Forces of the Republic of Azerbaijan (address: 34, Kaverochkin Street, Narimanov district, Baku). The team of the Ideological and Cultural Center of the Azerbaijan Army named after Hazi Aslanov and the military bands will present a concert program.

It is also planned to hold various events s part of the celebration of the 74th anniversary of the Victory over Fascism in Nakhchivan, Ganja, Shamkir, Sumgayit, Barda, Agdam, Terter, Beylagan, Lankaran, Gusar, and Khirdalan on May 9.