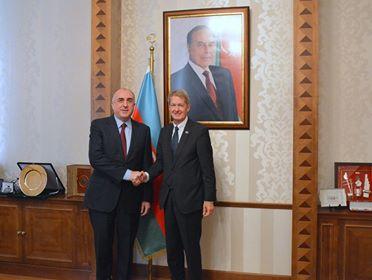 Axar.az reports referring to the Ministry of Foreign Affairs of Azerbaijan.

At the meeting, the sides exchanged views on the current state of bilateral relations between the two countries and expressed satisfaction with the progress made in energy, political, economic and other areas.

Ambassador James Lyall Sharp said that he is pleased to be appointed to Azerbaijan and vowed to spare no efforts for further development of relations between the two countries during his diplomatic tenure.

Furthermore, Minister Elmar Mammadyarov informed his interlocutor on the latest situation over the settlement of the Armenia-Azerbaijan Nagorno-Karabakh conflict and referring to the recent statements of the Armenian leadership highlighted that such statements serve the escalation of tensions in the region and undermine the peace process.

The sides also exchanged views on other regional and international issues of mutual interest.