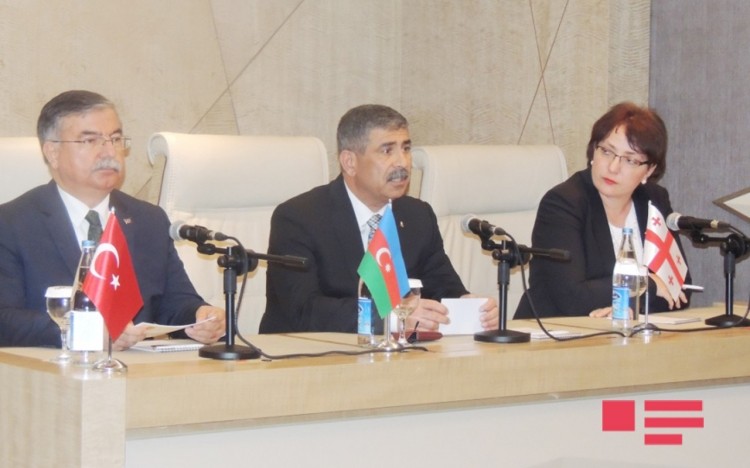 The fourth trilateral meeting of the Azerbaijani, Georgian, and Turkish defense ministers has come to an end at the Congress Center named after Azerbaijan’s national leader Heydar Aliyev in Gabala on May 15.


Addressing the press conference, Azerbaijani Defense Minister Zakir Hasanov said during the meeting the efficiency of developing relations and activities between the three friendly and neighboring countries was emphasized, future prospects of relations in this format were discussed, and views were exchanged on numerous issues of mutual interest.


“The parties reiterated the importance of enhancing the combat readiness of the three countries’ armed forces and holding trilateral joint military exercises in order to achieve mutual interoperability, trilateral development of military education and training, development of cooperation on cyber security, and further improvement of trilateral exercises on the protection of oil and gas pipelines,” Hasanov said.


He noted that a memorandum of understanding is expected to be signed between Azerbaijan, Turkey and Georgia.

“The memorandum, which is being prepared, will be the legal base of our cooperation and allow our trilateral activities to enter a new stage,” the minister said, adding that it is planned to implement new initiatives and projects in a trilateral format.


Hasanov mentioned that during the bilateral and trilateral talks the military and political situation in the region, as well as security issues were discussed, and the importance of stability in the region was underlined.


He went on to say that the Armenian-Azerbaijani Nagorno-Karabakh conflict, particularly the recent developments along the contact line of Armenian and Azerbaijani troops were thoroughly discussed during the talks.

“We stressed the importance of a peaceful solution to the Nagorno-Karabakh conflict in accordance with the principles of territorial integrity,” Hasanov said.

He expressed hope that the military cooperation between Azerbaijan, Georgia and Turkey will contribute to the strengthening of fraternal and friendly relations between the peoples of the three countries, as well as the restoration of peace and stability and achievement of sustainable development in the region.