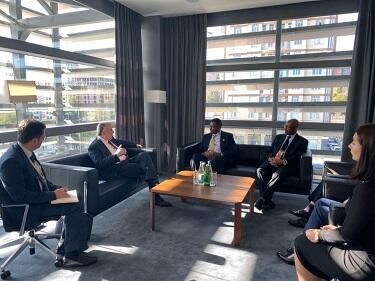 Azerbaijani Foreign Minister Elmar Mammadyarov has held a number of meetings in the framework of the 18th Summit of the Non-Aligned Movement.

The prospects of development of cooperation between Azerbaijan and the Maldives in political, economic, educational and tourism spheres were discussed at the meeting with the Minister of Foreign Affairs of the Republic of Maldives Abdullah Shah.

Abdullah Shah thanked the Government of Azerbaijan for the high level organization of the Non-Aligned Movement Ministerial Conference.

Elmar Mammadyarov said that mutual visits will give impetus to the development of cooperation between the two countries.

Minister Abdulla Shahid underlined the importance of direct flights between the two countries.

In turn, Minister Elmar Mammadyarov proposed to take appropriate measures to abolish visa regime between the two countries in order to promote tourism.

The sides also discussed the issues of strengthening bilateral relations and cooperation in the international arena.

At the meeting with Zambian Foreign Minister Joseph Malanji, the two countries underlined the prospects for enhancing cooperation between the two countries in political, cultural and humanitarian areas. In this regard, the importance of enhancing the legal framework between the countries for the deepening of cooperation in the field of tourism and education, as well as the application of a visa-free travel system.

Elmar Mammadyarov underlined the importance of taking advantage of the existing perspectives between Azerbaijan and Zambia on bilateral platforms as well as international platforms, including the UN and Non-Aligned Movement.

At the meeting with Deputy Minister of Foreign Affairs of Ethiopia Marcos Tekle expressed satisfaction with the current state of cooperation between the two countries. The prospects for further expansion of cooperation in the fields of economy, trade and other areas were highlighted.

The Ethiopian official congratulated Azerbaijan on its chairmanship in the Non-Aligned Movement and the successful organization of the XVIII Summit. He expressed hope for the success of Azerbaijan's presidency and further development of bilateral relations between the two countries.

Minister Elmar Mammadyarov paid attention to the importance of coordination between the Non-Aligned Movement and the G-77 and the joint efforts within the South-South Cooperation Platform. Elmar Mammadyarov recalled his visit to Ethiopia and said the visit was fruitful. He invited his Ethiopian counterpart to visit Azerbaijan.