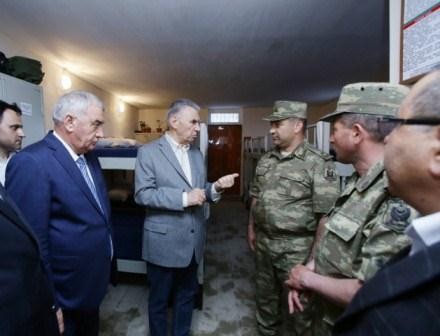 In Fuzuli region, Ali Hasanov viewed the construction of a newly-built settlement for IDPs.

During his visit to the region Deputy PM familiarized himself with a strategically important Lala Tepe height which was liberated from the occupation of the Armenian armed forces in early April, and met with Azerbaijani soldiers and officers. He reviewed the conditions created for soldiers. Ali Hasanov praised the successful activities of the Defense Ministry and armed forces, and wished soldiers and officers new victories.

Ali Hasanov then met with the IDPs living in Finnish-type residential settlements in the region. He said the IDPs would soon be resettled in a new, state-of-the-art settlement in the region, which is provided with all the necessary infrastructure.

Ali Hasanov also reviewed the progress of construction of a new settlement for IDPs in Fuzuli region. He spoke to representatives of the companies engaged in the construction work. Under the project there will be a total of 400 apartments in the settlement. The Deputy PM was informed that a 360-seat school building, 120-seat kindergarten, medical center, club and community center, post office and administrative building will be constructed here.

In his interview with AZERTAC, Ali Hasanov shared his impressions on the meeting with soldiers in Lala Tepe height, underlining their high spirit and strong sense of patriotism. Ali Hasanov quoted President Ilham Aliyev as saying that the Azerbaijani people did not want a war and they stand for a peaceful resolution of the conflict. "But if the enemy continues its provocations, we believe that the powerful Azerbaijani army will soon free our occupied territories," Mr Hasanov added.

Ali Hasanov then visited Aghdam and Tartar regions to view the houses which were destroyed as a result of the artillery attack of the Armenian armed forces.

The Deputy PM was informed that as a result of Armenia's provocative attacks the Azerbaijani territories located along the troops' line of contact were shelled on a regular basis. IDPs and local residents were seriously damaged, houses were destroyed, military servicemen and the civilian population were killed. Some 17 IDPs were killed, while 40 were wounded. Some 452 houses which were settled by internally displaced persons were damaged, 15 of them were completely, while 437 partially destroyed, 311 heads of cattle were annihilated.

Work has already begun to restore the destroyed houses.

Ali Hasanov met with the residents affected by the Armenian shelling, and noted that their destroyed houses would be restored under instructions of President Ilham Aliyev.

Local residents said they are not afraid of the enemy and stand firm in their own land. "We rely on our President, Supreme Commander-in-Chief Ilham Aliyev and our army and thank our President for his care and attention," they said.

They also hailed President Ilham Aliyev`s and his spouse Mehriban Aliyeva's visit to the frontline regions and their meetings with soldiers and officers, villagers and internally displaced persons, saying this visit boosted their enthusiasm and confidence in victory.