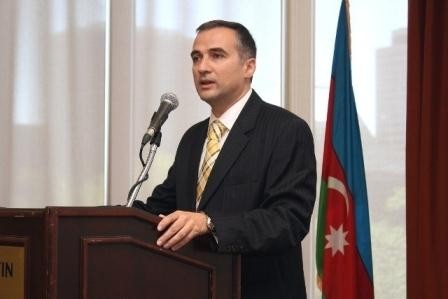 Ambassador of Azerbaijan to the Czech Republic Farid Shafiyev attended the conference titled “Should we fear Islam?”, organized by the Foreign Affairs Committee of the Chamber of Deputies of the Czech Parliament.

Though the purpose of the conference was to discuss the problems of Muslim communities in Europe and find ways to solve them, some participants made Islamophobic statements, the Azerbaijani embassy in the Czech Republic told on Thursday.


One of Czech speakers said that Islam is an ideology similar to that of Nazi, equating it with terrorism and urging for destroying it.


Azerbaijani and Turkish ambassadors to the Czech Republic expressed their protests to these hateful and xenophobic statements.

Azerbaijani ambassador Shafiyev, in turn, strongly criticized the organizers and participants of the conference for such hateful speeches contrary to the freedom of speech.

He noted that it is wrong to equate terrorist attacks committed under the name of Islam with this religion. The ambassador drew the attention of the participants to the terrorist acts perpetrated in Azerbaijan and Turkey by Armenian terrorist organizations and groups.