"Armenia's nuclear threat must be stopped” 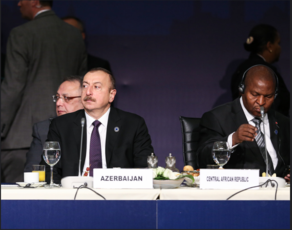 “In some cases the UN Security Council resolutions are implemented within days, if not hours,” the president said, noting this case is actually a policy of double standards against Azerbaijan.

Another serious threat to the region, according to Azerbaijani president, is the outdated Armenian nuclear power plant in Metsamor.

“There are reports of Armenia exploiting the radioactive waste from this power plant. Armenian parliamentarians and other officials declared this April that Armenia has a nuclear weapon, so called the "dirty bomb", President Aliyev said. “The international community needs to react to it. Armenia's nuclear threat must be stopped.”

He went on to say that necessary work has been carried out to improve the living conditions of those who became refugees and IDPs as a result of the Armenian occupation.