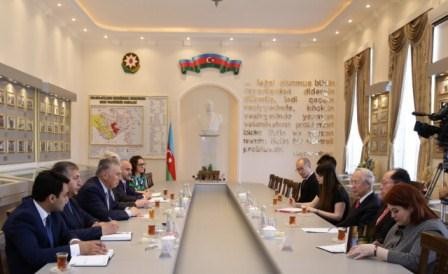 Azerbaijan's Deputy Prime Minister, chairman of the State Committee for Refugee and IDP Affairs Ali Hasanov has received President of the Japanese Fuji Optical Company, prominent Japanese scientist, winner of the prestigious Nansen Refugee Award, Dr. Akio Kanai. Ali Hasanov praised the humanitarian accomplishments of the Fuji Optical Company in Azerbaijan and personal efforts of Dr. Kanai since 2005. "More than 2 million USD has been spent by Fuji Optical to accomplish its humanitarian activity in Azerbaijan over the last 12 years," Mr Hasanov said.

The Deputy PM noted that Japan is the country that granted the most loans to Azerbaijan during the years of independence.

Ali Hasanov stressed that Dr. Akio Kanai is the owner of the Fuji Optical Ltd., a private company based in Japan, which has been a generous donor of the United Nations High Commissioner for Refugees (UNHCR) in the last four decades.

"Since 1983, the Company has donated more than 150 thousand pairs of eyeglasses delivered to refugees, IDPs and other vulnerable people. UNHCR has facilitated vision aid activities of Fuji Optical in six countries of Asia, Europe and Africa, conducted vision aid missions to four out of those countries through UNHCR. Azerbaijan is one of those countries and this year it will be the 12th such mission of the Fuji Optical Company to the country," Mr Hasanov said.

The Deputy PM expressed his gratitude to Akio Kanai for the free of charge optometric services to refugees, IDPs and vulnerable population.

President of the Fuji Optical Company Akio Kanai hailed comprehensive conditions created for refugees and IDPs in Azerbaijan. He expressed his gratitude to the government of Azerbaijan and local executive authorities for their assistance in successfully implementing the mission.

The meeting was attended by the Japanese Ambassador to Azerbaijan Tsuguo Takahashi and UNHCR Representative in Azerbaijan Dag Sigurdson.

After the meeting with the Deputy Prime Minister, the team of the six optometrists, headed by Dr. Akio Kanai, was taken to Western regions of Azerbaijan in order to conduct free of charge eye screening and eyeglasses distribution for internally displaced and vulnerable population in Barda and Agjabedi. In the meantime, UNHCR Headquarters has assigned a filming crew to Azerbaijan to prepare materials for the 2016 Nansen Refugee Award ceremony to be held at the margins of the UNHCR Executive Committee meeting in early October. The filming crew headed by Ms. Kathryn Porteous, Nansen Refugee Award Co-manager from External Relation Division of UNHCR Headquarters, is going to capture the work of Dr. Kanai and his team in Barda, and also visit to Yeni Khojavend settlement to meet with beneficiaries of the water supply project implemented with the money of the Nansen Refugee Prize awarded to Dr. Kanai ten years ago.

The essence of the humanitarian undertakings of the Fuji Optical is not limited to providing sole humanitarian aid, but also demonstrating support towards the displacement challenge faced by Azerbaijan and the work of UNHCR. Since UNHCR is a specialized UN agency mandated to lead and co-ordinate international interventions for the protection and well-being of refugees and IDPs, it continues to raise awareness and facilitate all efforts aimed to support the displaced people in Azerbaijan.