“No one is allowed to interfere in our internal affairs” 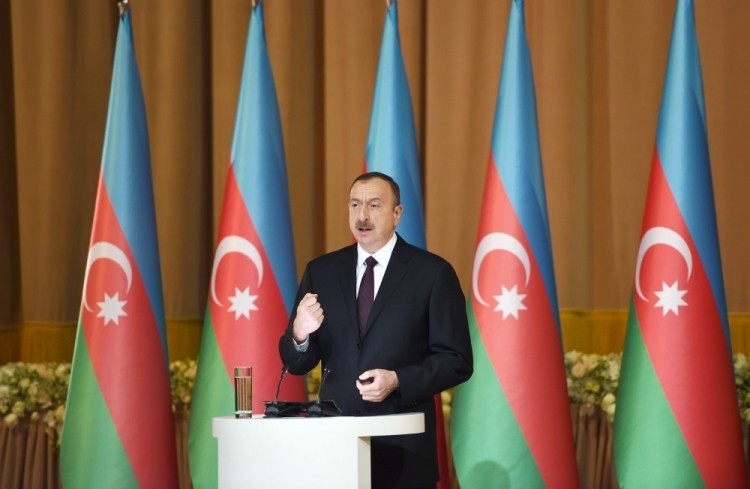 "The development of democracy is of great importance for any country, including Azerbaijan. I think we have made great successes in this direction. In Azerbaijan, all democratic institutions are successfully functioning, all freedoms - freedom of speech, freedom of the press, freedom of assembly, freedom of political activity are provided. There are no limits and will not be," said Azerbaijani President Ilham Aliyev at the official reception on the occasion of the national holiday of Azerbaijan - the Republic Day.

The Head of State pointed out that without the security and stability there can be no talk of democracy, economic and social development: " There are very dangerous processes in the CIS, Europe, the Middle East also in our neighborhood. Democratic norms are violated, discriminatory tendencies are strengthened and national-religious confrontation, misunderstanding and war have started. On television, we see that violence is used in the developed countries against the demonstrators. In the past some have tried to accuse us that Azerbaijan allegedly violated rights, democracy is weak, and there is no freedom of assembly. Of course, everyone knows that all of this - a lie. In Azerbaijan no one was savagely beaten, no one was offended, no restrictions were placed. How is it that, when it comes to us, these fictitious charges are characterized as an authoritarian regime, and in countries that are considered the cradle of democracy, the videos that we have seen these days on TV are considered democracy.”

President Ilham Aliyev said that this policy of double standards must end: “It has become unbearable. Of course, the people of Azerbaijan perfectly see and know everything. They know the reason of the campaign waged against us, who is the target, and which result is expected. The reason is that we go our own way, the way of independence. We do not interfere in the internal affairs of other countries and do not allow anyone to interfere in our internal affairs. Some forces do not accept it, as they are accustomed to the fact that countries in other places are controlled by their will. The target, of course, is the political leadership of Azerbaijan and me. Because, I am the head of this country and define the policy of Azerbaijan. I and the people of Azerbaijan are the guarantors of the independence of Azerbaijan. However, once again I want to say, democracy is our conscious choice on our way. Azerbaijan has made great successes in this direction, but we must recognize that much remains to be done. No society is perfect. We will continue efforts in this direction.”