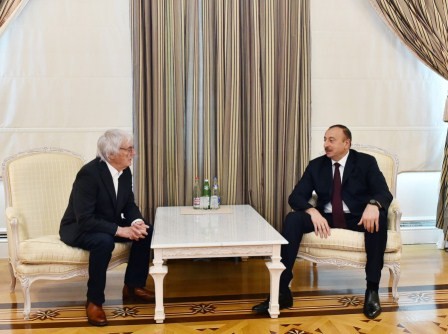 President of the Republic of Azerbaijan Ilham Aliyev has received CEO of Formula One Management Bernie Ecclestone.

CEO of Formula One Management Bernie Ecclestone hailed the preparations for Formula 1 Grand Prix of Europe in Baku. He said he was deeply impressed by development processes in the Azerbaijani capital.

Bernie Ecclestone said Formula 1 Grand Prix of Europe would contribute to promoting development processes taking place in Azerbaijan in the world. He said he was happy that Azerbaijan joined Formula 1 family.

Saying that Azerbaijan had a good experience of hosting international events, the head of state noted that capital Baku was ready for Formula 1 Grand Prix of Europe. President Ilham Aliyev said the people of Azerbaijan were enthusiastic about F1, which had a total global audience of 500 million people and was one of the most famous sporting events. We are interested in increasing the global awareness about the beauty of Baku and the country`s development, said the head of state. President Ilham Aliyev noted that international events held in the country were of vital importance in this regard. The head of state praised the fact that the number of tourists coming to Azerbaijan increased recently. Highlighting the importance of Formula 1 Grand Prix of Europe, the President said the event would contribute to the growth in the number of tourists visiting Azerbaijan. The head of state said the increase in tourist flow allowed to promote development processes taking place both in Baku and regions of the country. President Ilham Aliyev said Formula 1 Grand Prix of Europe was of vital importance from this point of view.