Release of Azerbaijani hostages may be discussed in St. Petersburg 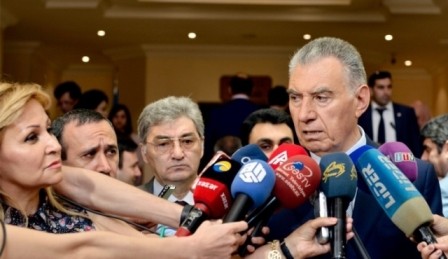 The issue of releasing Dilgam Asgarov and Shahbaz Guliyev, who were taken hostage by Armenians, is likely to be raised at the summit of the Azerbaijani, Armenian and Russian presidents to be held in St. Petersburg on June 20, Azerbaijani Deputy Prime Minister, Chairman Chairman of the State Committee for Refugee and IDP Affairs Ali Hasanov told reporters.

Every Azerbaijani citizen worries about the fate of Dilgam Asgarov and Shahbaz Guliyev, who are being held hostage by Armenia, Hasanov said noting that Azerbaijani President Ilham Aliyev is closely following this process and raises this issue at all the meetings.


He said that Dilgam Asgarov and Shahbaz Guliyev’s freely traveling to their native land Kalbajar was a blow to the opposite side.


“It was such a blow to the current criminal regime in Armenia that they have failed to recover themselves so far. Unfortunately, numerous appeals to all relevant international organizations for the release of the Azerbaijani hostages have yielded no results,” the deputy PM stressed.


During an operation in the Shaplar village of Azerbaijan's occupied Kalbajar district on July 11, 2014 Armenian forces killed an Azerbaijani, Hasan Hasanov, and detained two other Azerbaijanis, Shahbaz Guliyev and Dilgam Asgarov. A criminal case was filed against them.


Afterwards, a "court" sentenced Asgarov to life imprisonment and Guliyev to 22 years in prison.