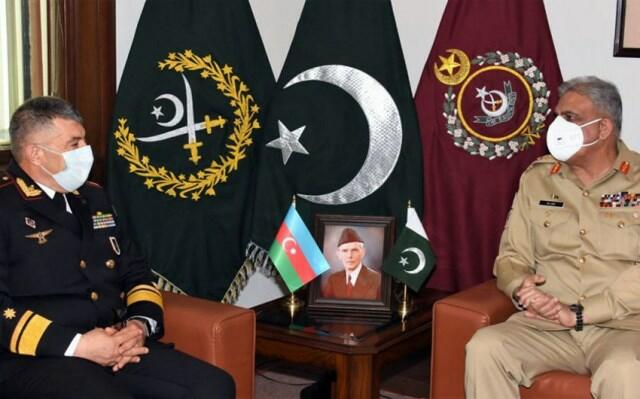 Commander of the Naval Forces of Azerbaijan, Rear Admiral Subhan Bekirov, who is on a visit to the Islamic Republic of Pakistan, has met with the Commander of the Land Forces of this country, Army General Qamar Javed Bajwa.

Axar.az reports citing MoD that Army General Qamar Javed Bajwa congratulated the Azerbaijani people on the victory in the Patriotic War and ensuring the territorial integrity of our country, wished the mercy of Allah Almighty to the souls of all servicemen and civilians who died as Shehids and healing to the wounded.

The Commander of the Land Forces of Pakistan expressed his country's readiness to get involved in the process of demining the liberated territories of Azerbaijan and restoration work to be done in these territories.

Rear Admiral S. Bekirov conveyed the greetings of the Minister of Defense of the Republic of Azerbaijan, Colonel General Zakir Hasanov to the Commander of the Land Forces of Pakistan, emphasizing that our country attaches great importance to military cooperation with Pakistan.

Then, the parties exchanged views on cooperation in the military field.