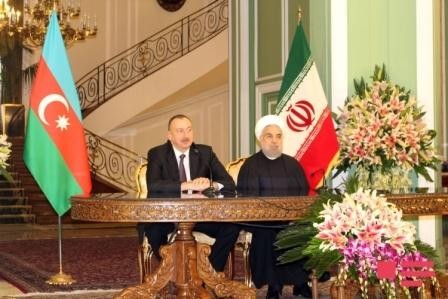 Azerbaijan has always opposed the anti-Iran sanctions and expressed its stance on the matter in international arena, Azerbaijani President Ilham Aliyev said on Tuesday, IRNA reported.

He made the remarks at a joint press conference with his Iranian counterpart Hassan Rouhani in Tehran.

President Aliyev said he is pleased with the lifting of the sanctions imposed on Iran and congratulated the Iranian president and people.

Heading a high-ranking delegation, the Azerbaijani president arrived in Tehran today at the invitation of President Rouhani. A number of documents on mutual cooperation were signed between the two countries during President Aliyev’s visit.