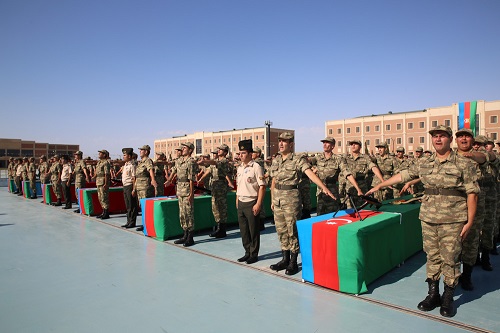 On September 24, the commission established by the relevant order of the Minister of Defense that includes the chiefs of departments and head departments of the ministry, as well as senior officers of the General Staff of the Azerbaijan Army held a meeting.

Axar.az reports citing the Ministry of Defense, that the meeting discussed the process of distributing newly recruited conscripts with the aim of manning military units of the Azerbaijan Army.

According to the relevant order of the Supreme Commander-in-Chief, the process of distributing conscripts based on the "Plan for sending conscripts to military units in October 2021" was carried out by means of special computer software.

The distribution of conscripts to the military units was implemented in a completely transparent way taking into consideration the exterritorial recruiting concept.

It should be noted that the representatives of the State Security Service and the State Service for Mobilization and Conscription were also involved in the work of the commission.