"Armenian aggression must be reflected" 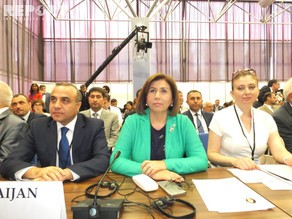 Tibilisi plays host to the 25th session of the OSCE PA today.

Meeting of the Standing Committee was held within the session entitled '25 Years of Parliamentary Co-operation: Building Trust Through Dialogue'. Agenda of the organization, financial issues, changes to several documents discussed at the meeting.

Head of the Azerbaijani delegation Bahar Muradova addressed the committee meeting and stressed importance to reflect Armenian aggression, liberation of occupied territories of Azerbaijan in the documents to be adopted by OSCE PA. B.Muradova said that mentioning these issues in the OSCE PA documents in the period of negotiations towards the peaceful resolution of Armenian-Azerbaijani, Nagorno-Karabakh conflict will give impetus to the peace process.

Then the plenary session started. After opening the event by Chairman of the assembly Ilkka Kanerva, Chairman of Georgian Parliament David Usupashvili, President Giorgi Margvelashvili, Prime Minister Georgti Kvirikashvili addressed the event. Georgian officials highly appreciated coinciding of the OSCE PA 25th session with the 25th anniversary of Georgia's state independence. The participants expressed their views about the OSCE's role in development of member states, resolution of conflicts in the world, in Europe and the South Caucasus.