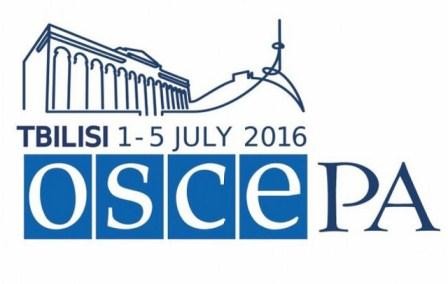 Another provocation of anti-Azerbaijani forces was prevented during the 25th session of the OSCE Parliamentary Assembly in Tbilisi.

A group of representatives of NGOs, which are financed by some European anti-Azerbaijani forces, tried to hold an event and make distorted speeches against Azerbaijan.

This provoked sharp protest of Azerbaijani and Georgian representatives.

Addressing the event, head of the Human Rights Protection Organization in Georgia Levon Chkheidze, pro-rector of the Georgia Caucasus Strategic Studies Institute Simon Kopadze, director of the Art-Parallel TV Tengiz Tkhivala hailed Azerbaijan`s economic development, its leading role in the South Caucasus, as well as the development of democracy in the country.

Member of the Azerbaijani delegation to the OSCE PA Kamran Nabizade said the freedom of speech and press was ensured in Azerbaijan.

He also highlighted the consequences of Armenia`s aggression against Azerbaijan, saying over a million Azerbaijanis became refugees and IDPs as a result of this military aggression.