OSCE MG co-chairs due in Ankara to mull NK conflict 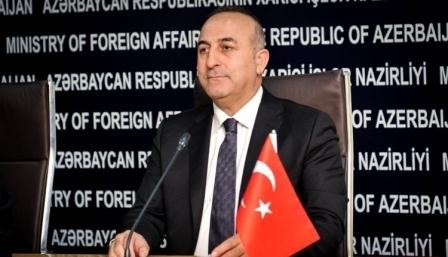 OSCE Minsk Group’s co-chairs will visit Ankara July 18 and will inform the Turkish side about the negotiations on the settlement of the Armenia-Azerbaijan Nagorno-Karabakh conflict, said Turkey’s Foreign Minister Mevlut Cavusoglu in Baku July 15.


Cavusoglu made the remarks during a joint press conference with his Azerbaijani counterpart Elmar Mammadyarov.


“Turkey, as a member of the OSCE Minsk Group, will continue to make efforts for resolving the Nagorno-Karabakh conflict,” he added.


The Nagorno-Karabakh conflict should be resolved through peaceful and diplomatic means, said the FM, urging Armenia to avoid provocative actions.


“We have witnessed that provocative actions and ceasefire violations during the April events produced no results,” said Cavusoglu, noting that the normalization of Turkey-Azerbaijan ties will have a positive impact in the Nagorno-Karabakh conflict settlement.

Ankara will support formulas to be accepted by Azerbaijan for the conflict settlement, the FM said.


Turkey and Russia will continue to discuss this problem both at the level of presidents and foreign ministers, he added.