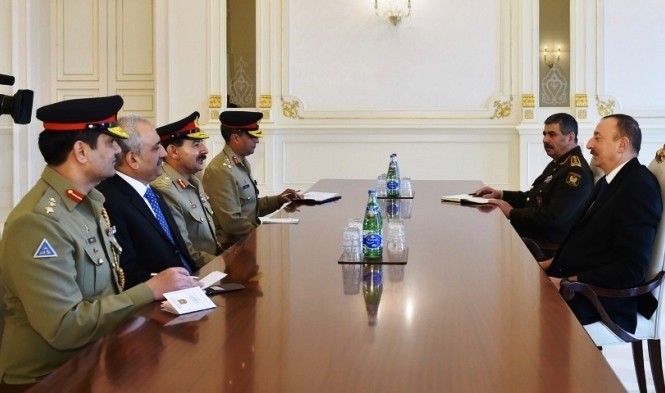 Rashad Mahmood said political, cultural and religious relations between Pakistan and Azerbaijan are deeply rooted in history, noting that both countries have always supported each other in the most difficult times.

The Pakistani guest expressed confidence that he will hold mutually fruitful contacts with his Azerbaijani counterparts during the visit.

President Ilham Aliyev, for his part, recalled with satisfaction the successful visit of Pakistani President Mamnoon Hussain to Azerbaijan and his recent meeting with Pakistani Prime Minister Muhammad Nawaz Sharif in Davos.

The head of state said bilateral relations built upon historical roots are successfully developing, praising Azerbaijan and Pakistan always supporting each other within international organizations.

President Aliyev noted that Azerbaijan is willing to improve bilateral relations with Pakistan in the political, economic, cultural, military, and other areas.

The president expressed his confidence that during the visit of the delegation led by Rashad Mahmood discussions will be held for further strengthening of cooperation between the two countries and this visit will be successful in terms of taking additional measures for the expansion of bilateral relations.