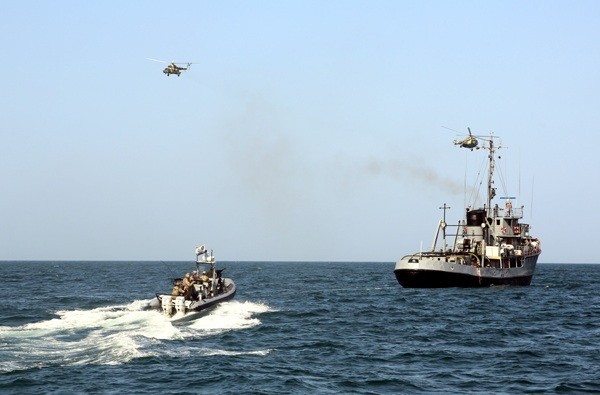 On the instructions of President of the Republic of Azerbaijan, Supreme Commander-in-Chief of the Armed Forces Ilham Aliyev and in accordance with the approved plan of combat readiness, the next stage of exercise with live-fire was held in the Naval Forces.

Exercise involved about 3,000 servicemen, more than 30 warships, boats, up to 20 combat aircrafts, helicopters and more than 20 rocket and artillery installations, the Defense Ministry said on its website.

On August 24, during the main stage of the exercise, commanding staff of the Ministry of Defense on the command and control ship in the sea range observed the maneuvers and live-firing of forces and means carrying out training tasks.

In the first stage of the exercises carried out with the involvement of forces and means of the Naval Forces, the Air Forces, the Rocket Forces and Artillery and also Special Forces the measures to bring the Navy into the state of combat readiness, the withdrawal of groups of ships and military units in the areas of concentration as well as integration and combat coordination are successfully implemented.

Planning of operations for the protection of energy infrastructure in the Azerbaijani sector of the Caspian Sea and bringing combat missions into the forces participating in the exercise are completed in the next stage of the exercises.

At the last stage combat aircrafts and helicopters of the Air Force, forces and means of the Rocket Forces and Artillery located along the shoreline and also Special Forces in conjunction with each other carried out training and combat missions to liberate the oil platform and merchant vessel captured by terrorist and sabotage group, as well as the destruction of the ships illegally penetrated into the Caspian sea operational area.

Targets of simulated enemywere destroyed and the tasks have been successfully completed during the main stage of the exercise carried out with combat firings.

Defense Minister Colonel General Zakir Hasanov highly appreciated the professionalism, level of practical, moral and psychological readiness of military personnel as well as the readiness of units involved in the exercises.