IS:"If it is not ours, then won't be yours either" - Photos 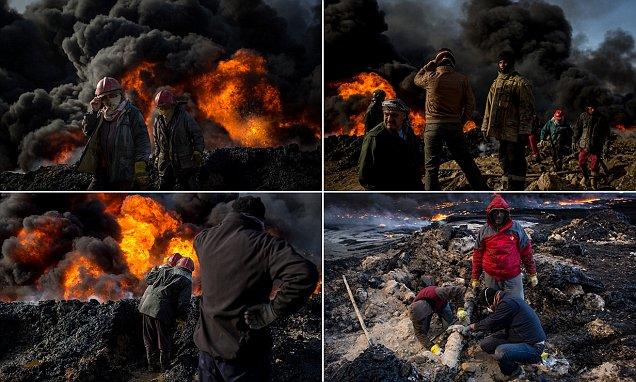 Oil wells set on fire by ISIS are still burning four months after the terror group fled a jihadi-held area of Mosul.

The battle to retake the Iraqi city from the Islamic State group is leaving a legacy of environmental damage and health risks that will pose dangers to people for years to come.

ISIS set fire to oil wells before the Qayyarah area was recaptured by Iraqi forces in August, and these have burned for months, turning sheep that graze in the area black with soot.

Iraqis have already paid the initial price from burning oil wells and a sulphur factory that ISIS set alight south of Mosul, Iraq's last jihadist-held city which is the target of a major military operation.

The fires, combined with water pollution and the potentially toxic remains of destroyed buildings, military equipment and munitions, will also present longer-term threats to people in areas around and inside Mosul.

'We are concerned about how the pollution will affect the health of local populations and negatively impact their capacity to rebuild quality, sustainable livelihoods within those affected areas,' said Jenny Sparks of the International Organization for Migration.

A United Nations report on environmental and health risks in the Mosul area said that 'hundreds of people were treated for exposure to chemicals, and millions are exposed to soot and gases from the burning oil wells'.

A 16-year-old shepherd has spoken of the turmoil farmers face in the area.

'We can't sell our sheep any more. We have had some sheep die, other times people won't buy them because they look black,' said Jaber.

Iraqi civil defence forces have been battling the Qayyarah fires, and while they have extinguished some, others are still burning.