The Jara Festival was a great success in Dubai - Photo 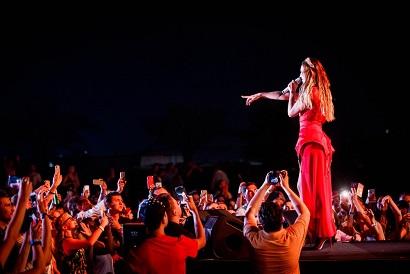 Jara International Music Festival started in 2016, but for the first time this event was organized outside of the CIS.

Axar.az informs that, on May 3, at the Rixos Premium Dubai, one of the most luxurious hotels in Dubai, the brightest representatives of the Russian variety scene are Gregory Leps, EMIN, Leonid Agutin, Valeriya, Egor Krid, Jasmin, Alexander Panayotov, Ivanushki International, Artik & Asti, Vremya i Steklo, MARUV, Olga Buzova, Albina Canabayeva, Slava, Rodriguezzz, Rita Dakota and others.

A giant scene has been set up at the Jumeirah Beach Residence on the shores of the Persian Gulf. Within the framework of the festival, 3 tons of stage equipment, 300 kilowatt light and sound equipment were brought to Dubai. More than 3,000 spectators listened to a spectacular concert lasting over 5 hours outdoors. This was an unprecedented show in the Arab Emirates! "Jara" brought together Russian music lovers in Dubai and danced all the guests from the beach to the auditorium and danced with their favorite artists.

One of the organizers of the Jara festival, musician and businessman EMIN said: "Our Jara Festival is a promising project and one of the most exciting events. Therefore, I am very happy that the first place for her tour was Dubai, which meets all the advanced trends. On May 3, a very brilliant music show was performed by most popular artists. It's great to have so many of us in the evenings. Therefore, next year we will think about holding several festival days. "

"This is a great event for us, because Jara, the first time we've been to Dubai, is a great event," says Maxim Berin, president of BERIN IGLESIAS ART. None of the concerts held in Dubai before, can not be compared to the number of balls or total enthusiasm. The festival was so successful that a number of high-level concert halls in Dubai said they wanted to cooperate with us. We plan to turn into a traditional annual festival in Jamaica, which launches such a successful start in Dubai, the most talented, current and interesting artists of the Russian pop-scene, as well as their numerous fans.

"Rixos Premium Dubai" and "Jara" festival have given unforgettable rest and bright emotions to all the guests! Albina Canabayeva and Timur Rodriguez, as well as Yulia Baranovskaya and Konstantin Tarasyuk, have added holiday atmosphere and music to the concert.

The Jara Festival will be held in Baku on July 25-28, the coast of the Caspian Sea.