The Queen has admired by the Karabakh horses - Photo 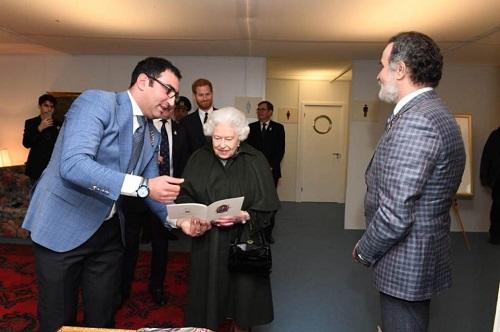 It's been an exciting week for the Queen with the arrival of her eighth great-grandchild coinciding with one of her favorite events of the year, the Royal Windsor Horse Show.

And the monarch certainly looked in great spirits today as she entertained the King of Bahrain, Hamad bin Isa Al Khalifa, alongside her son Prince Andrew.

The two royal families enjoy a warm relationship, and King Hamad is a regular fixture at the event, where Saturday's King Cup is named after him.

He shares a passion for all things equestrian with the Queen, and gave her two prized Arabian horses from his stables as a present in 2013, with her returning the favor with the gift of one of her own horses in 2017.

The annual show is just a short distance from Windsor Castle and the monarch drove herself to the event in her black Range Rover.

The Kelaghayi and the Karabakh Horses of Azerbaijan are pictured performing at the show, with one performer holding onto the horse as it gallops. The five-day event, held in Berkshire, is now in its 76th year and attracts well-heeled visitors from all over the world

The Kelaghayi and the Karabakh Horses of Azerbaijan perform at the pageant. The show is one of the Queen's favorite events of the year

A man breathes fire during the Karabakh Horses of Azerbaijan performance. The annual show is just a short distance from Windsor Castle

The show sees competitors taking part in a range of events from show jumping to dressage, including the Kelaghayi and the Karabakh Horses of Azerbaijan, above, forming a human pyramid on horseback