Atakule was painted in the colors of our flag - Photo 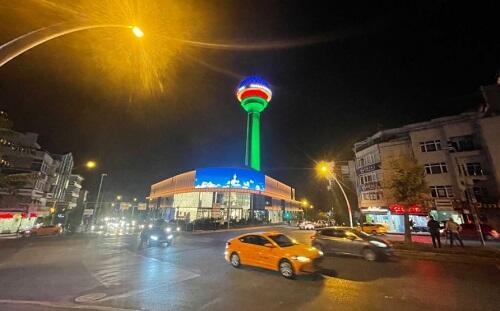 On the occasion of the 30th anniversary of the restoration of diplomatic relations between Azerbaijan and Turkey, the Atakule Tower, one of the symbols of Ankara, was painted in the colors of the Azerbaijani flag.

Axar.az reports that Turkish and Azerbaijani flags on the tower, as well as "Happy 30th anniversary of Turkish-Azerbaijani diplomatic relations!" In Turkish and English. The words are reflected on the board.

It should be noted that on the significant days of Azerbaijan and our brotherhood, it has become a tradition to paint the Atakule Tower in the colors of the Azerbaijani flag as a sign of solidarity.