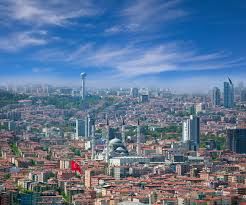 The British weekly newspaper The Economist has published a cartoon about Turkey.

Axar.az reports that, in the cartoon, the ball with the Turkish flag on it quickly descends from the hill. The wheels of the ball bear the symbols of the NATO flag.

Not content with this, the newspaper also insulted Recep Tayyip Erdogan. Under the photo, "Is Turkey worse off than it is for NATO?" the question is asked.