Armenia’s DM due in Iran for important talks 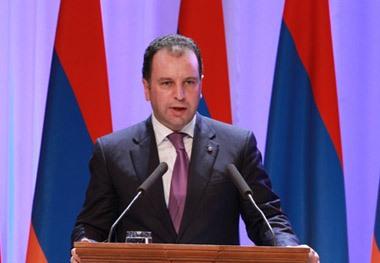 Armenia’s Defense Minister Vigen Sargsyan on Friday unveiled plans for an upcoming visit to Iran to hold important talks with the Iranian officials.

Axar.az reports that, “This is a very important dialogue. We have many common security problems in the region,” Sargsyan told reporters on Friday.

The Armenian minister also highlighted the great importance he attaches to cooperation with the neighboring countries.

In December 2016, Iranian President Hassan Rouhani began a tour of regional countries by visiting Armenia with a diplomatic and business delegation.

During the visit, top officials from the two sides signed five memorandums of understanding (MoUs) and cooperation agreements, including an agreement on using a joint border crossing linking Iran’s Norduz to Armenia’s Meghri.