Trump has agreed with Salman 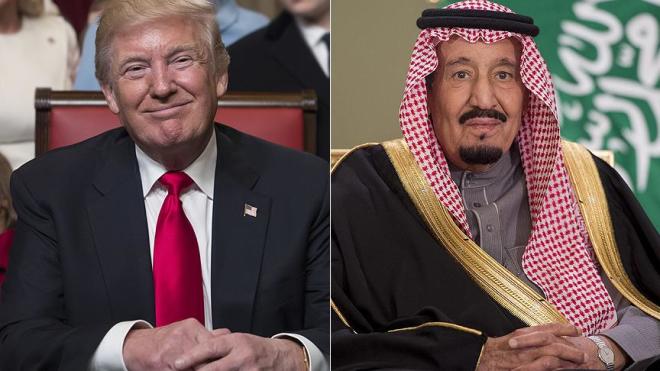 During the call, they discussed the historic relations between the two countries and the latest developments in the region and the world.

They also discussed the strategic partnership for the 21st century between the two countries and the importance of improving the economic, security and military cooperation between them.

They also spoke of the need to address Iran’s “destabilizing regional activities,” and the establishment of safe zones in Syria and Yemen.

During the conversation President Trump expressed his support of the Saudi Vision 2030 which outlines the kingdom’s plans for the future including the reduction of the dependency on oil.

In a statement released by the Saudi Press Agency it was reported that the views of the two leaders were identical on the issues that were discussed during the call, including the fight against terrorism, extremism, their finance, formulating the appropriate mechanisms, and confronting those who seek to undermine security and stability in the region and interfere in the internal affairs of other states.

The two leaders agreed to schedule the visits in the coming period so as to promote cooperation and joint action and activate the strategic partnership between the two countries further to match the depth of the historic relations between them.

A White House readout about the call said that the “two leaders reaffirmed the strong partnership between both countries and committed to further strengthen cooperation on fighting radical Islamic terrorism.”

It added: “They discussed recent developments in the Middle East, including the fight against ISIS and joint efforts to address the conflict in Yemen and elsewhere in the region. The President also raised the idea of supporting safe zones for the refugees displaced by the conflict in the region, and the Crown Prince agreed to support this initiative. The President and Crown Prince closed by underscoring their commitment to close consultations on issues of mutual concern.”