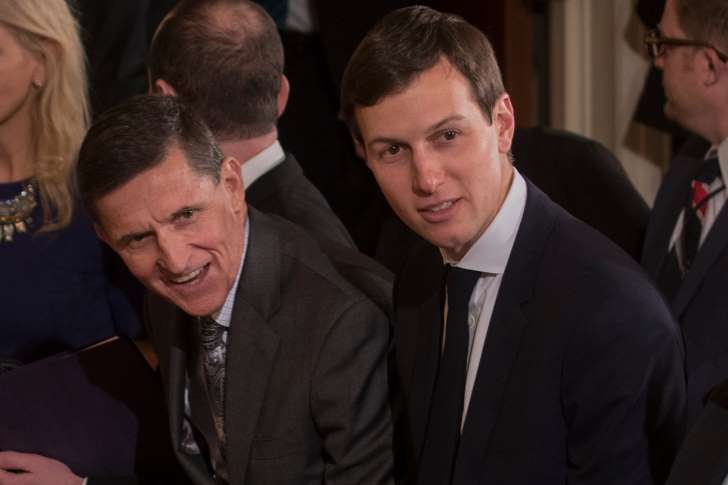 Michael T. Flynn, then Donald J. Trump’s incoming national security adviser, had a previously undisclosed meeting with the Russian ambassador in December to “establish a line of communication” between the new administration and the Russian government, the White House said on Thursday.

Jared Kushner, Mr. Trump’s son-in-law and now a senior adviser, also participated in the meeting at Trump Tower with Mr. Flynn and Sergey I. Kislyak, the Russian ambassador. But among Mr. Trump’s inner circle, it is Mr. Flynn who appears to have been the main interlocutor with the Russian envoy — the two were in contact during the campaign and the transition, Mr. Kislyak and current and former American officials have said.

But the extent and frequency of their contacts remains unclear, and the disclosure of the meeting at Trump Tower adds to the emerging picture of how the relationship between Mr. Trump’s incoming team and Moscow was evolving to include some of the president-elect’s most trusted advisers.

The White House has repeatedly sought to play down any connections with Mr. Kislyak. Attorney General Jeff Sessions acknowledged this week that he had met twice with him during the campaign, despite previous denials.

The New Yorker reported this week that Mr. Kushner had met with Mr. Kislyak at Trump Tower in December. Hope Hicks, a White House spokeswoman, confirmed on Thursday that Mr. Flynn was also at the meeting in response to questions from a New York Times reporter.

It is common and not improper for transition officials to meet with foreign officials. But all meetings between Trump associates and Russians are now significant as the F.B.I. investigates Russian interference in the American election and whether anyone close to Mr. Trump’s campaign was involved.

The meeting in December came at a crucial time, just as the Obama White House was preparing to sanction Russia and publicly make its case that Moscow had interfered with the 2016 election.

What is now becoming clear is that the incoming Trump administration was simultaneously striking a conciliatory pose toward Moscow in a series of meetings and phone calls involving Mr. Kislyak. Its aim, Ms. Hicks said on Thursday, was to build a relationship that could be the basis of future cooperation between the United States and Russia.

The Trump Tower meeting lasted 20 minutes, and Mr. Kushner has not met since with Mr. Kislyak, Ms. Hicks said.

When first asked in January about Mr. Flynn’s contacts with Mr. Kislyak, the White House said that there had been only a text message and phone call between the men at the end of December, and that both came before the United States imposed sanctions. That was quickly contradicted by news reports.

Mr. Flynn’s story then began changing, and the White House eventually acknowledged the two men had discussed the sanctions and how the two countries could move past the acrimony once Mr. Trump was in office.

American officials have also said that there were multiple telephone calls between Mr. Flynn and Mr. Kislyak on Dec. 29, beginning shortly after Mr. Kislyak was summoned to the State Department and informed that, in retaliation for Russian election meddling, the United States was expelling 35 people suspected of being Russian intelligence operatives and imposing other sanctions.

Mr. Kislyak was irate and threatened a forceful Russian response, according to people familiar with the exchange. He then left the State Department and called Mr. Flynn, the first in a series of calls between the two in the 36 hours that followed.

American intelligence agencies routinely wiretap the phones of Russian diplomats, and transcripts of the calls showed that Mr. Flynn urged the Russians not to respond, saying relations would improve once Mr. Trump was in office, according to the current and former officials.

Mr. Flynn’s failure to fully disclose the nature of the calls with Mr. Kislyak ultimately cost him his job last month after a tumultuous 25 days as national security adviser.

Current and former American officials have said that Mr. Flynn had contacts with Mr. Kislyak during the campaign. But few of the specifics of those contacts were known. The Russian ambassador has acknowledged that the two men had known each other since 2013 and were in contact during the campaign.

“It’s something all diplomats do,” Mr. Kislyak was quoted as saying by The Washington Post, though he refused to say what subjects he discussed with Mr. Flynn.