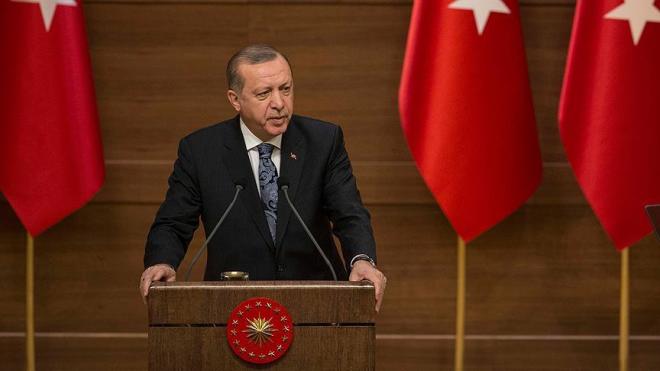 President Recep Tayyip Erdogan late Friday gave a strongly-worded reaction after Turkish ministers were barred from holding public rallies in two German cities ahead of the April 16 referendum in Turkey.

“They need to be put on trial for aiding and abetting terror,” Erdogan said, slamming German authorities for letting terrorist PKK leaders hold rallies while preventing Turkish leaders from addressing their communities.

On Thursday, the municipality of Gaggenau in southwest Germany revoked its permission for Turkish Justice Minister Bekir Bozdag's meeting, citing concerns about overcrowding. This prompted Bozdag to cancel his planned visit to Germany altogether.

Economy Minister Nihat Zeybekci’s planned address on Sunday to a Turkish community in western city of Cologne was also cancelled by local authorities over security concerns.

The measures follow calls from German opposition parties and media for a blackout on Turkish politicians ahead of the referendum on constitutional reforms, including the crucial change to a presidential system of governance.

The German Foreign Ministry has denied involvement of the federal government. Chancellor Angela Merkel has said her country supports freedom of speech.

Erdogan noted how Germany blocked his planned speech via video conference at a July 2016 rally in Cologne in the wake of last year’s failed coup attempt in Turkey.

"I was to participate at a rally via video conference, but Germany’s Constitutional Court took a decision in two hours -- which is a phenomenon not seen anywhere in the world -- and prevented me from making a speech.

"But they are connecting Cemil Bayik [a leader of the PKK terrorist group] from Qandil [in Iraq] and he is making his speech there [Germany]," Erdogan said.

Ties between Ankara and Berlin have been strained in recent months. Turkish leaders have criticized their German counterparts for turning a blind eye to terrorist organizations such as the PKK and FETO, which they say use Germany for their activities targeting Turkey.

Among Germany’s 3 million-strong Turkish community, nearly 1.5 million of them are eligible to vote. They will cast their votes at Turkish consulates in Germany between March 27 and April 9.