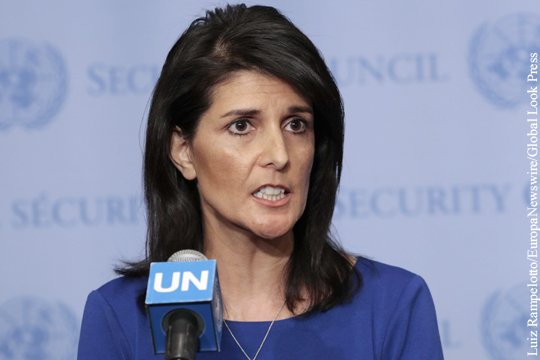 The United States has said that it is no longer focused on ousting President Bashar al-Assad as it seeks a new strategy to end Syria's civil war.

American officials have been shifting away from their former insistence that he must go for some time, but now they have made it explicit.

In New York on Thursday, the US ambassador to the United Nations Nikki Haley condemned Assad's history of human rights abuses against his own people.

But she said Washington would focus on working with powers like Turkey and Russia to seek a political settlement, rather than focusing on Assad.

"You pick and choose your battles," Haley told reporters.

"And when we're looking at this, it's about changing up priorities and our priority is no longer to sit and focus on getting Assad out."

Shortly after Haley briefed a small group of journalists, US officials tried to clarify her comments.

A US mission official told Al Jazeera that while the US does not believe that Assad is a legitimate leader of Syria, his future is not the country's only concern.

The official said the US is also very interested in trying to create the conditions so that the Syrian people themselves can pick their new government, one without Assad.

Other objectives of the US in Syria are to get rid of the threat from ISIL and to curb Iranian influence, the official said.

US Secretary of State Rex Tillerson also addressed the future of Assad at a news conference in Turkey.

"I think the... longer term status of President Assad will be decided by the Syrian people," Tillerson said, standing alongside Turkish Foreign Minister Mevlut Cavusoglu.

The Syrian opposition, whose cooperation will be needed in any negotiated solution, reacted furiously to the US shift in stance.

"The opposition will never accept any role for Bashar al-Assad at any phase," said Monzer Makhos, a spokesman for the High Negotiations Committee, which represents the opposition in negotiations over Syria's war.

"There will be no change in our position," he warned.

Under Barack Obama's administration, the US made Assad's departure a key goal, but new president Donald Trump has put the accent on defeating the Islamic State of Iraq of the Levant group, known as ISIL or ISIS.

"Our priority is to really look at how do we get things done? Who do we need to work with to really make a difference for the people in Syria," Haley said.

"We can't necessarily focus on Assad the way the previous administration maybe did. Do we think he's a hindrance? Yes," she said.

"Are we going to sit there and focus on getting him out? No."

Previously, the United States has stuck by a UN-backed peace plan that would see Assad "transition" from office while an interim government is formed.

Tillerson is due in Moscow next month for talks with Russian leaders, and Trump has long argued the powers should work together against ISIL.

US-backed forces are closing in on the group's Syrian stronghold of Raqqa, laying the groundwork for an assault on the city.

Numerous diplomatic efforts have failed to end the Syrian conflict, which has killed more than 320,000 people and displaced millions since it erupted in 2011.

A fifth round of UN-sponsored peace talks is taking place in Geneva but no breakthrough has been reported and they are scheduled to end on Friday.