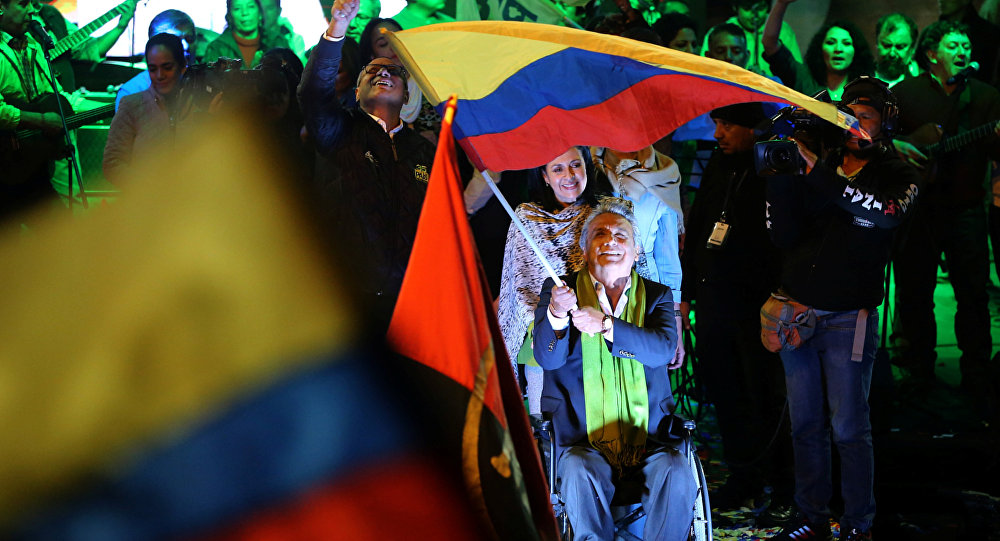 The newly elected Ecuadorian president asked WikiLeaks Julian Assange not to interfere in the internal affairs of the country, as well as other states' politics.

Ecuador's President Lenin Moreno on Friday asked WikiLeaks whistleblowing website founder Julian Assange not to interfere in the internal affairs of the country, as well as other states' politics, while remaining in his delicate position.
"His situation does not allow him to speak about countries' politics, especially the politics of our country," Moreno said, as quoted by Prensa newspaper on Friday.

In April, Moreno won the presidential election in Ecuador before assuming office on May 24.

In April, Moreno warned Assange against meddling in the country’s politics in response to the Wikileaks founder's mocking comments about Guillermo Lasso, who lost the election. Assange, in particular, offered Lasso to leave the country within 30 days.

In February, Lasso said in an interview with The Guardian newspaper that in case of his victory in the presidential election he would "cordially ask" Assange to leave the Ecuadorian Embassy in London within 30 days.

Earlier in May, Swedish prosecutors confirmed dropping the long-running rape investigation against Assange. UK police, on the other hand, have insisted that they would still have to arrest the WikiLeaks founder for past violations of bail conditions if he stepped out of the Ecuadorian embassy, where he has been holed up for years.

Assange has been residing at the Ecuadorian Embassy in London since 2012 for fear of being extradited to Sweden on sexual abuse allegations. On December 4, 2015, the UN Working Group on Arbitrary Detention's (WGAD) ruled that Assange's detention was arbitrary. The United Kingdom and Sweden refused to recognize the legitimacy of the decision and to end Assange's prosecution.