Russia and France agree to disagree on Syria, Ukraine 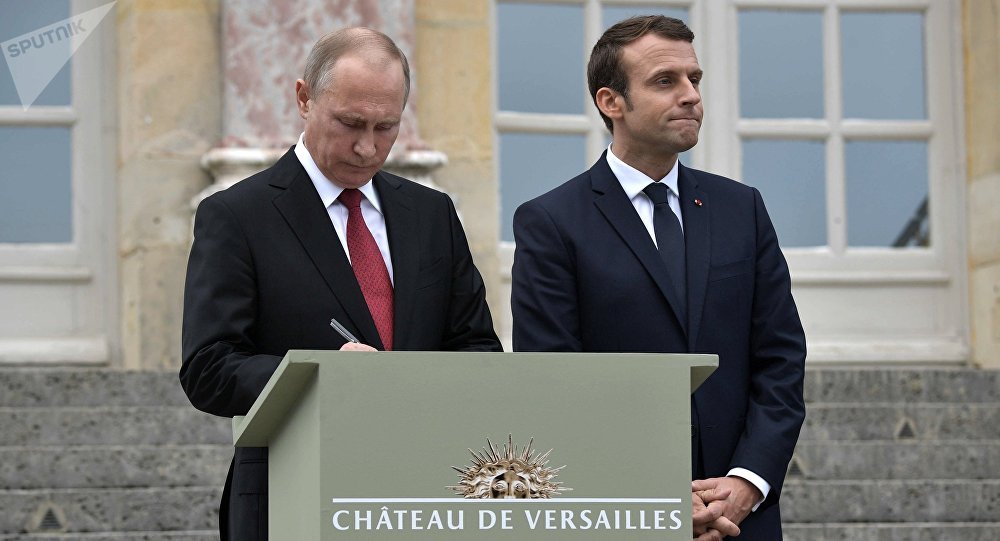 Russian President Vladimir Putin and his French counterpart, Emmanuel Macron, held their first face-to-face talks in Paris on Monday to focus on bilateral relations and a number of hot-button international issues.

Radio Sputnik discussed the issue with Dr. German Dottori, an expert on geopolitical and strategic studies at Luiss University of Rome.

When asked how predictable the outcome of the Paris summit was and whether there were any signs of a breakthrough, Germano Dottori said that the mention of chemical weapons use in Syria was an implicit invitation to stage “false-flag” attacks there which, in turn, could lead to a direct confrontation between France and the UN on the one side, and Russia on the other.

“We are also far from a situation where Russian and French navies could cooperate as allies off the Syrian shores,” he added.

He said that the only thing Putin and Macron seem to have agreed on is the need to stay committed to the joint fight against international terrorism.

When asked about the practical steps by Russia and France that could follow regarding the war on terror Russia and France, professor Dottori said that nothing substantial had been agreed during the Paris meeting.

“What we can see now is a bloc led by President Trump that is looking for an agreement and appeasement with Russia, and those who oppose this kind of policy both in and outside the US,” Dottori noted.

He added that President Macron would likely enlist the help of people like George Soros and former US President Barack Obama to create obstacles to President Trump’s plans concerning Russia and also Ukraine and Syria.

Back in 2016, when he was the miniter of economy, Macron said he wanted the sanctions on Russia to be lifted. However during his election campaign, he changed his view.

Speaking about the course of action Macron might take after discussing the situation in Ukraine with Putin, Dr. Dottori said that with the tensions now existing inside the Western bloc, he expected a strong opposition by Macron and German Chancellor Angela Merkel to President Trump’s idea of a new détente with Russia and any kind of compromises he could offer President Putin to end the crisis in Ukraine.

Summing up, Germano Dottori said he expected a great deal of tension between the EU and Russia now that Germany needs a real enemy to prop up its cause of a common European defense policy.

“But the real target now is not Putin, it’s Trump,” he said in conclusion.

Speaking at a joint press conference, the Russian leader said both countries were determined to cooperate in resolving the crises in Syria, Ukraine and the Korean Peninsula.

President Putin added that they also pledged to fight terrorism together. In his turn, President Macron stressed that none of the pressing issues that the world faces today can be resolved without dialogue with Russia.

The two leaders met on the 300th anniversary of Peter the Great’s diplomatic visit to France in 1717. They also spoke just days after the two-day meeting of G7 leaders in Sicily, which wrapped up on Saturday.