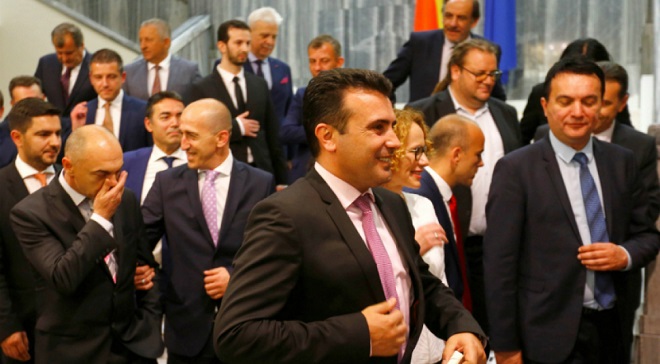 Macedonia's lawmakers on Wednesday evening endorsed a new government led by Social Democrats which is expected to steer the way out of a two-year-long political crisis and bring the country closer to membership in the European Union and NATO.

"I can state that the new government has been elected," the parliament speaker, Talat Xhaferi, said after the vote.

Zaev vowed to step up economic reforms and pledged to speed up the country's bid to join the European Union and NATO, but opposition parties said his goals would be difficult to achieve.

During the debate leading up to Wednesday's vote, which began on Tuesday, a deputy of the nationalist VMRO-DPMNE, Dimitar Stevanandzija, said Zaev made "promises that are unreal and absurd.”

The government will be hoping to lead Macedonia out of its worst political crisis since 2001, when Western diplomacy brought it back from the brink of civil war during an ethnic Albanian insurgency

Macedonia has been without a functional government since 2015, after a wiretapping scandal brought down the previous administration. Zaev's Social Democrats have formed a coalition with parties representing the country's ethnic Albanians.

Efforts to advance toward membership of the EU and NATO have stalled due to a row with Greece over Macedonia's name, which it shares with a northern Greek province.

Of the 25 ministers in Zaev's government, seven are ethnic Albanians, who make up one-third of the country's population.

Macedonia has domestic ethnicity issues to tackle. As part of the coalition deal, an ethnic Albanian was elected last month to be parliament speaker. That prompted protests by nationalists who stormed the parliament building and beat some deputies including Zaev.