OSCE President: We are concerned about S.Caucausus 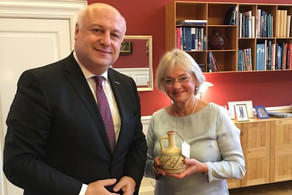 New President of OSCE Parliamentary Assembly, George Tsereteli and Pia Kjaersgaard, Speaker of the Danish Parliament discussed the issue of protracted conflicts in the OSCE area.

Axar.az informs citing Report that, in his first bilateral meeting as OSCE Parliamentary Assembly President, George Tsereteli (MP, Georgia) met today with Pia Kjaersgaard, Speaker of the Danish Parliament (Folketinget), for talks that focused on challenges to the OSCE area and Denmark’s contributions to the PA.

Tsereteli expressed gratitude to the Danish Parliament, which as host of the OSCE PA’s International Secretariat, makes it the single largest contributor to the Assembly’s budget.

Kjaersgaard raised concerns over protracted conflicts in the OSCE area, including in the South Caucasus, as well as the crisis in and around Ukraine, and wished Tsereteli success as Assembly President in promoting conflict resolution.

Tsereteli also extended an invitation to Speaker Kjaersgaard to participate in OSCE PA meetings, including the Bureau Meeting that is held in the Danish capital every spring.