Ultimatum of Lavrov: Armenia is forced to return regions 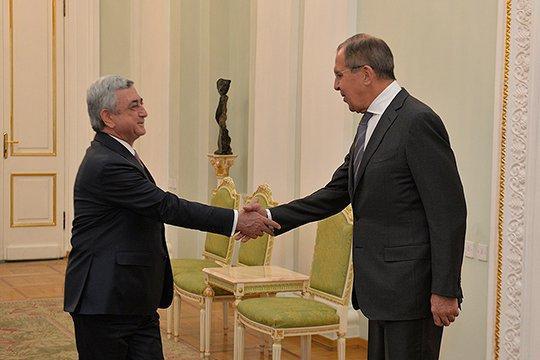 Because of Moscow's harsh conditions imposed on Armenia, Sargsyan's regime was between Scylla and Charybdis.

Axar.az informs ArmenianRерort writes about this, commenting on the results of the official visit of Russian Foreign Minister Sergey Lavrov to Azerbaijan and Armenia. The author of the article, Vigen Petrosyan, referring to his sources surrounded by Prime Minister Karapetyan and in the Office of President Sargsyan, reveals some details of Lavrov's visit to Yerevan.

According to sources, the conversation behind closed doors between Sargsyan and Lavrov was extremely tense. The thing is that Moscow is extremely concerned about the rapid decline in the rating of the EAES against the backdrop of an acute conflict between the two members of the union - Kazakhstan and Kyrgyzstan. Putin has invested too much energy and resources in this association, and therefore dissatisfied with the squabbling between Astana and Bishkek, which inevitably beats the image of this formation. Especially, on the eve of presidential elections in Russia.

Someone surrounded by the Russian president suggested that he increase the attractiveness of the EAEC that is melting before its eyes due to the accession of Azerbaijan to it. In Baku, these moods quickly caught on and therefore put a tough condition - we will think about the proposal to join the EAPP in exchange for the return of Baku to the 5 regions around Nagorno-Karabakh. After listening to Baku's opinion, Lavrov contacted the Kremlin, where, apparently, agreed to these conditions.

Having received clear instructions from the Kremlin, Lavrov arrived in Yerevan, where he had a very difficult conversation with Sargsyan. The author recalls that the adoption of a new member in the EAEC is possible only with the consent of all members of the association. That is, not only did Lavrov urge Sargsyan to agree to the possible entry of Azerbaijan into the EEA, but also stunned that ultimatum regarding the return of the liberated territories.

But that's not all. Lavrov also demanded in an ultimatum from Sargsyan not to sign the Agreement on Enhanced and Comprehensive Cooperation with the EU on November 24, during the Eastern Partnership Summit. According to some analysts, today the likelihood that Armenia and the EU will sign a framework agreement is close to 100%. This, in particular, said the director of the Caucasus Institute, political scientist Alexander Iskandaryan. And this is well understood by Moscow, which simply can not allow Armenia's "withdrawal" to the West.

According to the sources of the website, Lavrov informed Sargsyan that the Kremlin is ready to "agree" not to 5 but to two or three regions around Nagorno-Karabakh, which will become a prize of Azerbaijan for possible joining the EAEC. But only in the event that Yerevan does not sign an agreement with the EU. Sources say that Sargsyan seriously thought after such a difficult conversation with Lavrov.

"Apparently, Sargsyan was trapped. He, of course, tried to explain to Lavrov that Moscow's demands are absolutely impossible - even a hint that Sargsyan is ready to give at least one hectare of liberated land to Azerbaijan will be like death for the regime. If Sargsyan agrees, then he will be kicked out of the presidential chair in an instant, "the article says.

However, according to the interlocutors of the site in power, Sargsyan's arguments and exhortations to Moscow did not make any impression: "Apparently, the decision there has already been taken, and Sargsyan was caught in a corner. And it was clearly visible on his flushed face after a conversation with Lavrov, tete-a-tete. During the trip to Dilijan to open the school named after Monte Melkonyan, the president was blacker than the cloud, aggressively attacked his entourage. Earlier, we did not notice such a thing, "the interlocutors of the journalist told.

It is understandable - before it Moscow did not break through the knee so clearly and rigidly.