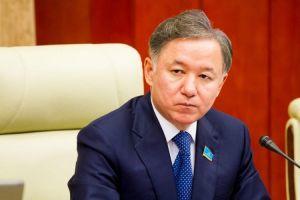 Chairman of the Mazhilis of the Parliament of the Republic of Kazakhstan Nurlan Nigmatulin arrived in Baku on Feb. 1.

Axar.az reports that Nurlan Nigmatulin was welcomed by First Deputy Speaker of the Azerbaijani Parliament Ziyafat Asgarov and other officials at the Heydar Aliyev International Airport.

Nigmatulin will meet Azerbaijani Parliament Speaker Ogtay Asadov and other officials during his visit, which will continue until February 2. He will also visit the TURKPA Secretariat in Baku.