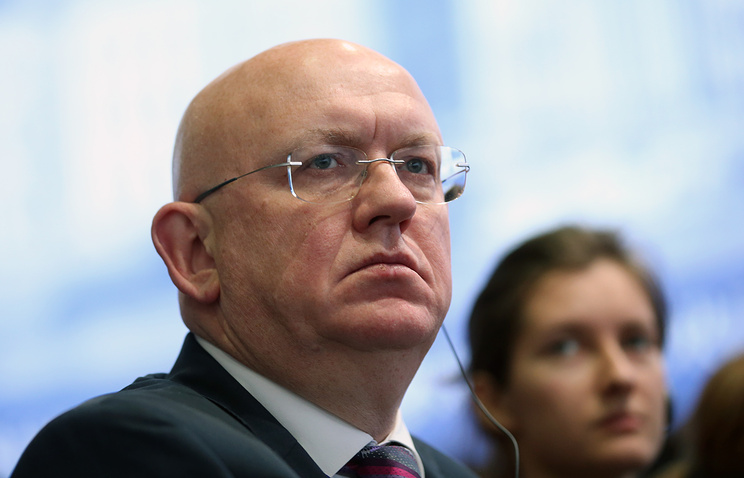 "We are ready to adopt a statement to the press on the Syrian chemical dossier, but not the way it is suggested by the sponsors, as its goal in the present wording is absolutely clear to us," the ambassador said. "The aim is to baselessly accuse the Syrian government of the use of chemical weapons that nobody has proved as of yet," the diplomat went on to say.

He said the draft statement does not mention Damascus, but a reference to Chapter VII of the UN Charter admitting the imposition of sanctions "makes the essence of this statement clear".

"We are ready to approve the statement to the press, but not the way it was offered by the partners. We have suggested amendments to it, which we are ready to circulate and to coordinate it as such," the Russian ambassador said.

He stressed that Russia "cannot accept the yet unconfirmed references to the use of chemical weapons until a reliable investigation is carried out, and we cannot accept a threat to a sovereign state for unproven actions".

He drew attention to the fact that the statement mentions the situation in Eastern Ghouta, Damascus suburbs. "Let me reiterate that last week we were ready to approve a president’s statement on the humanitarian situation in Syria. It had been coordinated, but our partners preferred to reject it," he said.

The Russia-suggested draft statement, whose copy TASS has at its disposal, denounces any use of chemical weapons and poisonous chemicals as weapons in Syria or elsewhere. The document emphasized the importance of bringing to justice those responsible for the attacks, as well as pointed to a need to create for his aim a truly unbiased, independent and professional investigation mechanism.

In January Russia put forward an initiative calling on the UN Security Council to establish an Independent Mechanism to investigate chemical weapons attacks in Syria for an initial period of one year. This mechanism is suggested to replace the OPCW-UN Joint Investigative Mechanism, which ceased to exist in November 2017 as UN Security Council member states failed to agree on extending its mandate.

The JIM was set up by the UN Security Council’s decision in August 2015 in order to establish those responsible for chemical weapons attacks. The commission presented a total of seven reports saying that Syrian authorities had been involved in four chemical weapons incidents. Russia many times criticized the JIM over its incompetence.