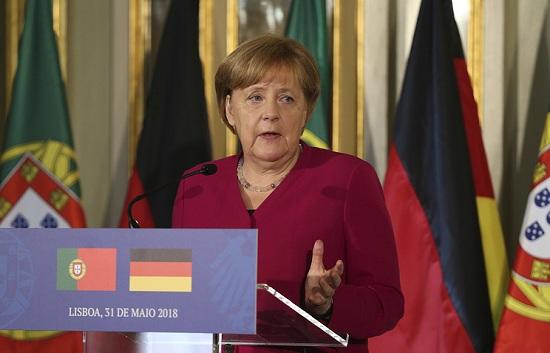 German Chancellor Angela Merkel on Friday called on Russia to release 24 Ukrainian sailors detained last year during a confrontation along the Kerch Strait.

“The arrest of 24 sailors was a worrying incident. Once again, I appeal for the release of these soldiers, this is a very important issue,” Merkel told a joint news conference with Ukrainian President Petro Poroshenko following their talks in Berlin.

Russia seized two Ukrainian navy ships and a navy tugboat along with 24 crew members off Crimea in late November, accusing the vessels of entering its waters and provoking conflict.

Merkel has underlined that Germany remains firmly committed to the Ukraine’s territorial integrity, and would continue its efforts to resolve the conflict in eastern Ukraine, a restive region near Russia’s border.

Asked about the upcoming presidential runoff in Ukraine and the future of Normandy format talks with Russia, Merkel said this format has proven to be useful.

“I believe that we should continue working in this format, it does not exclude talks with others,” she said, adding that Germany and France also had close consultations with other EU partners and the U.S. on the conflict in eastern Ukraine.

Following Russia’s illegal annexation of Crimea in March 2014, leaders of Germany, France, Ukraine and Russia met in Normandy, France for their first talks on the crisis.

In the first round, Poroshenko’s rival Vladimir Zelenskiy, a comedian with no political experience, got 30 percent of the vote, while Poroshenko came in second with nearly 16 percent.

Since pro-Russian President Viktor Yanukovych left office in 2014, Ukraine has faced a host of problems, including Russia’s illegal annexation of Crimea and the separatist conflict in eastern Ukraine.