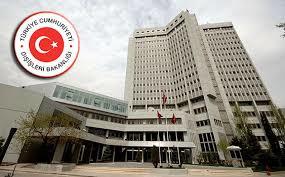 Turkey on Sunday condemned a deadly terrorist act in front of a shopping mall in the eastern Libyan city of Benghazi.

"We have received the news with great sorrow that a car bomb attack that took place in Benghazi yesterday claimed the lives of two UNSMIL [United Nations Support Mission in Libya] staff and left many people wounded," a statement issued by the Foreign Ministry said.

The ministry also conveyed the condolences to the families of the victims and wished speedy recovery to the wounded.

"We will continue to support the UN’s efforts for lasting peace, security and stability in Libya," it added.

The UN said on Saturday that three UN staff members were killed in a car bomb attack, adding that the Security Council met in an emergency session later in the day in New York and honored their "ultimate sacrifice".

It also added that another three workers were injured.

UN Secretary General Antonio Guterres also condemned Saturday's attack “in the strongest terms” and extended his "deepest condolences" to the bereaved families in a statement issued by his spokesman Stephane Dujarric.