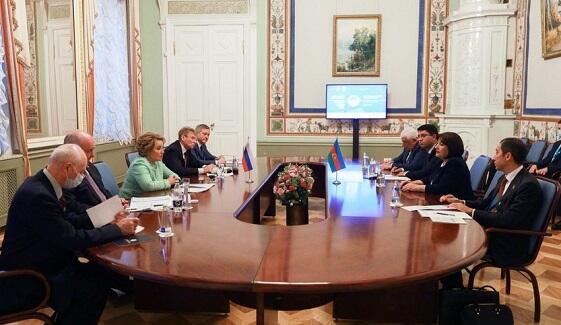 During the meeting, Speaker of the Milli Majlis Sahiba Gafarova said that the Third Eurasian Women's Forum was organized at a high level, and assessed such forums as an opportunity to discuss gender issues, as well as prospects for inter-parliamentary cooperation.

Informing about the 44-day war in Azerbaijan and the liberation of its lands, the speaker said that a completely new situation has emerged in the South Caucasus region. The conflict is a thing of the past and Azerbaijan has begun to rebuild its liberated territories.

The Speaker of the Milli Majlis noted that according to the Decree signed by President Ilham Aliyev in July this year, a new division of economic regions has been defined in the Republic of Azerbaijan. According to the decree, two new regions - Karabakh and East Zangazur economic regions - were created. The establishment of the Zangazur corridor is of great importance. Thus, the creation of this corridor will be a great contribution to the restoration of regional communications, as well as to the development of the region, ensuring peace and security.