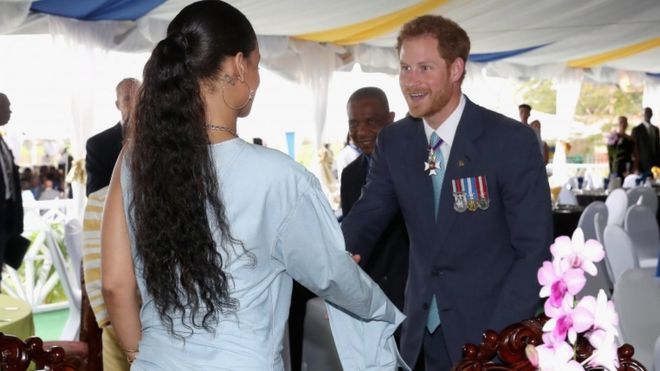 At an afternoon event in Bridgetown, Prince Harry kept the singer waiting as he stopped to greet the president of Guyana first, before turning to her.

Rihanna, who has had eight UK number ones and 29 UK top 10 hits, stood to greet the prince, who said: "Hello, it's very nice to meet you."

The pair later sat side-by-side on stage at a celebratory concert.

A senior royal aide said the prince, who wore his medals and his insignia as a Knight Commander of the Royal Victorian Order, had been told 20 minutes before he arrived at the afternoon gala that Rihanna would be there.

"We thought he would be meeting her for the first time at the concert," he said.

Rihanna wore a blue dress and opted for striking yellow finger nails - both colours are on the Barbados flag.

Prince Harry read a message from the Queen to mark the anniversary of the moment - on 30 November 1966 - that the country broke away from British rule.