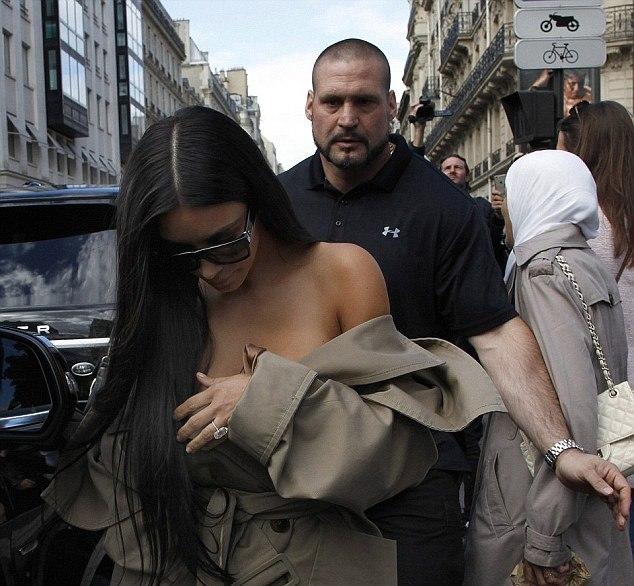 French police today swooped on a gang of veteran armed robbers suspected of stealing millions of pounds worth of jewellery from Kim Kardashian in Paris.

Coordinated raids at 6am saw a total of 16 men including a 'major thug' arrested in the city, and also in the south of France.
They are mainly in the age range 50 to 72, and most have long criminal records, said a source close to the case.

All are accused of breaking into the reality TV star's Paris apartment block last October, and tying her up at gunpoint, along with a security guard.

This morning, it emerged that the DNA sample that ultimately led to today's arrest was found on a piece of tape used to gag Ms Kardashian.

After three months of checks, it was finally found to correspond to a well-known criminal who had been involved in numerous armed robberies.

He has not been named but – like all the others in custody – can be held for up to 96 hours before being charged or released.

The sixteen men's homes are still being searched, with documents and other potential evidence being seized.

Raids are also underway at other key premises, including a jewellery shop in the centre of Paris.

The source confirmed that 'months of surveillance' has taken place, including phone taps.

Spending patterns have been looked at, and attempts to re-sell the jewellery stolen in October.

Beyond the five thought to have been directly involved in the crime, others include so called 'fences' who can dispose of stolen goods.

One theory is that many of Ms Kardashian's jewels ended up in Antwerp – the diamond capital of Europe.

The forensics material matches that of a well-known armed robber with a number of convictions whom another officer described as a 'major thug'. All the others arrested were linked to him.

'Coordinated raids took place at 6am today,' said the source. 'The men were arrested at addresses in greater Paris and in the Gard department.

Ms Kardashian, who flew out of Paris within hours of her ordeal, will now have to undergo the ordeal of watching a video of all the men.