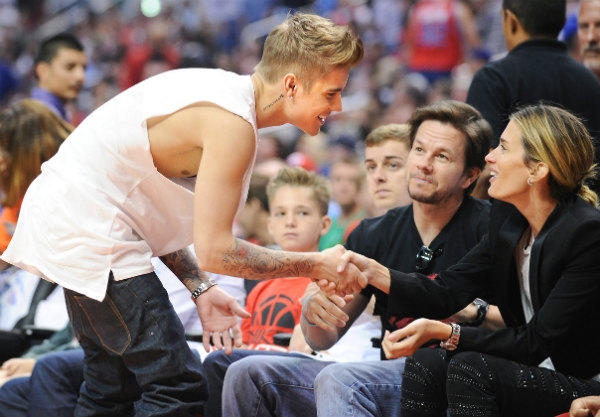 Mark Wahlberg had Justin Bieber join his wife and four children for dinner, but that doesn't mean he wants the 22-year-old heartthrob being part of his family.

On Friday's episode of The Ellen DeGeneres Show, the Patriots Day star initially plays coy as to who he had over for dinner, initially only saying that the person was a Canadian pop star, and that his 13-year-old daughter, Ella, was a fan.

DeGeneres presses Wahlberg to tell her who the dinner guest was, and he all but admits that it was Bieber. He also opens up about raising a teenager. "She's a good girl, but she's still a girl," he says, noting that Ella has dyed her hair blue. "So, there's a difference."

As for his daughter's admiration for Bieber, Wahlberg quips, "She liked him a lot when she was younger, turned on him completely, and then came back with a vengeance."

He adds, "Like, 'Dad, that's going to be my husband.' I was like, 'Over my dead body. Actually, over both your dead bodies.' I'll just go back to jail."

Not missing a chance to embarrass his daughter, Wahlberg says he told her that his Marky Mark days were not behind him. "I did threaten my daughter that I was going to join him musically just to embarrass her," he jokes. "And she was really appalled."