Ivanka "has done more for women" than anyone in DC 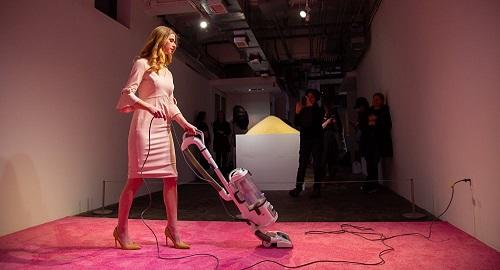 President Trump’s son on Tuesday said his sister Ivanka Trump “has done more for women than probably anyone in Washington, DC.”

Speaking on Fox & Friends about the Democrats' criticism of his father's administration, Eric Trump told the audience about a Washington, D.C. art installation currently open at the Flashpoint Gallery.

These leftists called up a modeling agency, saying, 'You know what, I want to get a nice woman to come to stand on a carpet, with a vacuum of all things, so that our people can throw food and crumbs to mimic a powerful woman who has done more for women than probably anyone in Washington, D.C.," Trump said.

Eric Trump referenced an art piece from CulturalDC entitled “Ivanka Vacuuming,” where guests are encouraged to throw crumbs at a silent, smiling model dressed to resemble the president's elder daughter Ivanka. The piece by New York-based artist Jennifer Rubell is “simultaneously a visual celebration of a contemporary feminine icon; a portrait of our own relationship to that figure; and a questioning of our complicity in her role-playing,” according to a news release.

"Think about that hypocrisy," Trump added. "They label themselves the quote, unquote 'party of women,' yet they're throwing food, they're throwing garbage at a woman on a carpet holding a vacuum cleaner to mimic someone who really does care and who has fought so hard for women."

Ivanka wasn’t impressed by the gallery either, saying “women can choose to knock each other down or build each other up. I choose the latter,” in a tweet.

The president’s son also noted that Democrats are “losing people” with their rhetoric aimed at members of the president's family, such as when Ivanka came under fire last year due to a scandal involving her sending of hundreds of emails related to White House business from her own personal email account.