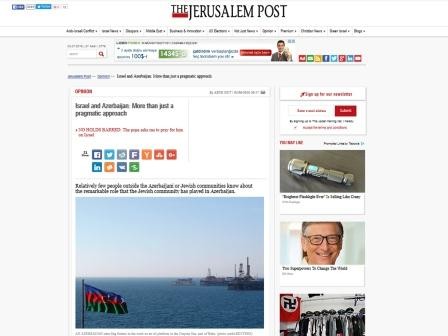 Israel has always been attracted to Azerbaijan, not only because there is no anti-Semitism in that country but also because of continuing expansion of economic ties, a noted expert on the former Soviet Union and the Middle East and the head of the Israeli NGO International Society Projects Arye Gut wrote in his article in ‘Jerusalem Post’.

Israel is purchasing Azerbaijani oil and investing in the country’s agriculture and industry, and Azerbaijan is interested in expanding ties in ecology, telecommunications, natural resources, and the like, according to the article. Both sides are promoting educational and cultural exchanges, the author said.

Israeli defense companies were also involved in the building of Azerbaijan military industry, Gut said in his article.

“In 2012, a $1.6 billion transaction involving the sale of weapons by Israel Aerospace Industries to Azerbaijan was reported,” the article read. “Over the past three years, Azerbaijan has become an even more significant destination for Israeli arms exports.”

Although previously focused on the oil and gas industry, it is now extending to other sectors of the economy, the article read.

“Azerbaijan has repeatedly proven that it plays a key and critical role in the South Caucasus and the Middle East,” Gut wrote in his article. “Azerbaijan also is a key partner in anti-terrorism intelligence gathering operations with the West.”

“The pragmatic approach of Azerbaijan, as a whole, includes religious tolerance, multiculturalism of Azerbaijani society and constructive relations with its neighbors in a region where diplomacy is much more complex than in many other parts of the world,” the article read. “All of these factors played a role in the successful formation of this emerging democracy.”

“Time and again, Azerbaijan has demonstrated that harmony is possible, and issues can be resolved without resorting to violence or strife,” Gut wrote in his article.